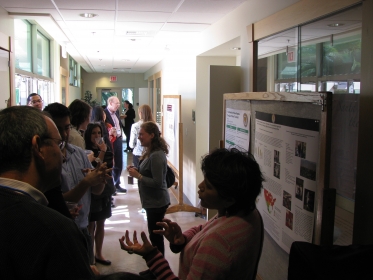 The goal of this workshop is to examine social, environmental, structural, and policy drivers of health disparities for sexual and gender minorities (SGM). Research on health for SGM is underrepresented in the literature, yet the health disparities suffered by these groups is large. Improving the health of sexual and gender minorities is a pressing national health concern. The aim of our Broom‐sponsored workshop is to amass experts to discuss new and forthcoming research in the field, and identify needs for future research. A second aim is to support graduate students who would like to pursue research in this field, by offering support on data availability, methods, and funding opportunities.

The Population Centers of the University of California - newly dubbed UCPop is pleased to announce its inaugural (remote) meeting, "Race and Inequality: A Collaborative UCPop Event."

Keynote talk: "Demography of Race: The Propaganda of Demography" by Tukufu Zuberi  (Lasry Family Professor of Race Relations, and Professor of Sociology and Africana Studies, University of Pennsylvania)

Breakout Sessions: The keynote talk will be followed by breakout sessions featuring research presentations by graduate-student associates of the four UC population centers.

This symposium will showcase in-progress research related to the COVID-19 pandemic. Short 5-10 minute talks will be followed by open discussion. Contact person is Heather Royer royer@econ.ucsb.edu.

Recent years have witnessed increased international commitments to abolish cultural practices deemed inherently harmful to women, particularly child marriage, female genital cutting and intimate partner violence. Addressing an urgent need to share insights across disciplines, this workshop will bring together a multidisciplinary group of social scientists, including evolutionary and cultural anthropologists, demographers, sociologists, political scientists and economists, each forging a new understanding of the origins and drivers of so-called ‘harmful cultural practices’; both questioning and informing current efforts of the international development sector to discourage them. Emphasis will be on low and middle-income country contexts, with invited speakers from both Europe and the Americas. Discussion sessions will focus on cross-cutting issues such as context-dependency in the evidence for harm, identifying the motivations of multiple actors that maintain seemingly harmful practices and the conflicts of interest therein, methodological considerations when working with sensitive research topics, and the evaluation and design of behavior change initiatives.

Gerry Mackie (University of California, San Diego): When and How is Law Effective in Reducing the Practice of FGM/C?

Nicolas Syrett (University of Kansas): Child Marriage and the Law in the United States.

August 25 & 26, 2017: "Expanding Bridges and Overcoming Walls"
"Expanding Bridges and Overcoming Walls" held at UCSB Corwin Pavilion, will feature top scholars and policymakers from Mexico and the United States to initiate dialogue on state-of-the-art research and current events in immigration, trade, and U.S.-Mexico relations. It is hosted by UC Santa Barbara’s Broom Center for Demography, UC Los Angeles’s North America Integration and Development (NAID) Center, UCI Center for Research on International Migration, Centro de Investigaciones y Estudios Superiores en Antropología Social (CIESAS) and El Colegio de Mexico.
In addition to the scholarly panels for general admission only, we will feature keynote talks by leading policymakers in California and Mexico, providing interactions between scholarly production and policymaking on both sides of the border.
The conference seeks to mobilize academics leaders in California and Mexico to develop cutting edge research on immigration, trade, economy, education and health.
http://www.expandingbridgesnotwalls.org/program.html
May 1, 2017: "Gender Inequalities in STEM Education and Occupations"

This one-day cross-disciplinary workshop will feature research from leading economists, psychologists, and sociologists on the sources and consequences of women’s underrepresentation in scientific, technical, engineering, and mathematics (“STEM”) fields of study and occupations. Although women have made great strides in gaining access to labor markets and systems of higher education in the United States, many STEM fields—particularly in certain physical sciences and engineering—remain strongly male dominated. The goal of this conference is to generate a broader conversation about the individual, structural, and cultural dynamics underlying the gender segregation of STEM fields, the ways in which gender may interact with racial, ethnic, class, and/or sexual identities in these domains, and how these dynamics may vary across time and across contexts.

May 4, 2015: "Environmental and Economic Impacts on Human Demography"

Population scholars from all over the world, and from several disciplines, will be gathering in San Diego April 30-May 2 for the annual meetings of the Population Association of America.  On May 4, several distinguished members of this group will join us here at UCSB to present and discuss their work.   The first session focuses on European demography and, in particular, demographic responses to the Great Recession.  The second session includes papers on innovative methods for measuring spatial inequality and social mobility.  In the afternoon, the focus shifts to the intersection of health, the environment, and population, concluding with a panel discussion of research frontiers in this area by UCSB faculty and visitors.

Francisca M Antman (University of Colorado, Boulder) “For want of a cup:  The rise of tea in England and the impact of water quality on economic development”

Fernando Riosmena (University of Colorado, Boulder) “A reflection on the association between (precipitation) variability and US migration out of rural Mexico”

Indigenous people (or native peoples, tribal peoples) number about 370 million in over 5,000 populations in 70 countries. Despite comprising only 5% of the world population, indigenous people constitute about 15% of the world’s poor. Many indigenous people continue to practice traditional subsistence practices, although the kinds and pace of lifestyle change vary widely among groups. In 2013, no group remains a pristine “isolate”; all are enmeshed to some extent in the politics, economics and culture of national and global society. Macro-level changes in socioeconomic conditions, market participation and acculturation (loosely combined into the term “modernization”) present new opportunities and challenges among indigenous people today. Despite the growing awareness and appreciation of indigeneity worldwide, even two decades after the International Decade of the World’s Indigenous Peoples was declared by the United Nations in 1994, indigenous people often experience higher morbidity and mortality than other populations in their home countries, higher poverty and greater discrimination. The gaps in wealth and income between indigenous and non-indigenous people have remained the same in many nations, especially in Latin America.

The goal of this workshop is to highlight current and potentially future health risks of indigenous people, and to address the related question about what causes and perpetuates “poverty traps” that lead to further health inequities. We pose the same question raised in the title of a paper in Lancet in 2006: “Indigenous peoples health – why are they behind everyone, everywhere?”. The epidemiological transition from receding pandemics to “lifestyle” non-communicable diseases has been observed in industrialized societies over the course of centuries, but has been non-existent, recent and incomplete among many indigenous populations, where many may suffer from both common infections like malaria and chronic diseases such as heart disease. Important questions to address include: (1) Are indigenous people at greater risk of certain types of ailments than majority populations? (2) Are new health threats emerging (e.g. obesity, diabetes, alcoholism) at the same time that others are diminishing (e.g. tuberculosis)? (3) What are the obstacles to improving indigenous physical and mental well-being?  (4) How is the changing state of indigenous health and well-being impacted (and impacting) social networks and other traditional means of buffering risk? (5) How do indigenous people perceive and conceptualize their own health, wealth and status amid socioeconomic change? The assembled group of speakers from across the social sciences will address these and other related questions.

February 23, 2013: Immigration and the Family: New Developments and Perspectives

When families immigrate to the US, they may come together or in several stages.  These  moves constitute a major disruption along their members’ developmental paths and a dramatic change in the social and economic context of their demographic behaviors.  Given the complexity of these trajectories -- involving joint interactions among duration of schooling, family formation, fertility, and engagement with the labor market -- this is an area of research that will benefit from a variety of disciplinary perspectives.  Three important approaches to framing this complex set of processes include life course theory from social psychology/sociology; life cycle theory from economics; and heterodox perspectives focused on place, exposure, and timing from geography.

The goal of the conference is to bring together leading and new researchers on family immigration working in a number of disciplinary perspectives, with a view to forging links that will yield new collaborative research.  To this end, the format will schedule ample time for informal interactions.

Aimee Chin "Impact of Bank Accounts on Migrant Savings and Remittances:Evidence from a Field Experiment"

Carola Suarez-Orozco "Growing Up in the Shadows: The Developmental Implications of Unauthorized Status"

Stephen Trejo "The Complexity of Immigrant Generations: Implications for Assessing the Socioeconomic Integration of Hispanics and Asians"

March 2, 2012: Gender and Family in the New Millennium:
http://www.broomcenter.ucsb.edu/conferences_workshops/about-santa-barbara

As the economic lives of men and women have converged, families have become both highly diverse and socioeconomically stratified in the United States and other countries. “Gender and Family in the New Millennium”, a day-long research workshop presented by the new Leonard and Gretchan Broom Center for Demography, will be held on the UCSB campus on Friday, March 2, 2012. This event brings together a group of leading scholars in sociology and economics who study the nature and origins of gender inequality in modern society and the economic, social and cultural influences that help shape contemporary work and family life. This will be the first in a series of Broom Center multidisciplinary research conferences exploring the frontiers of social science research on human populations.